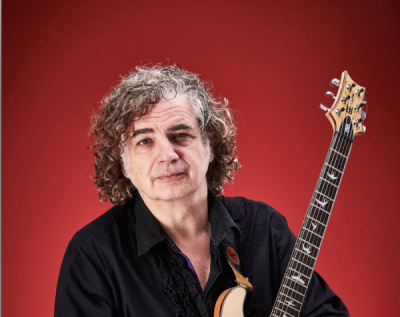 King Crimson's Jakko Jakszyk is currently appearing in his one-man show during the Edinburgh Fringe Festival performing The Road To Ballina which documents his search for his family. Jakko was born Michael Curran. Adopted by Polish and French parents, he grew up wondering who he was. On a voyage of self-discovery, he traced his mother to remote Arkansas and found his far-right leaning siblings. In The Road To Ballina, Jakko unravels the secrets of his past, examining the effect of nature versus nurture to reveal a glimpse of who he might have become.
The Road to Ballina started life over twenty-five years ago as an autobiographical music commission for BBC Radio 3 - one of Jakko’s solo projects, it used speech as part of the composition to tell the tale of his complicated family history and his search for his own identity. The 60-minute show is directed by Michael Attenborough CBE, with animations from director Sam Chegini. 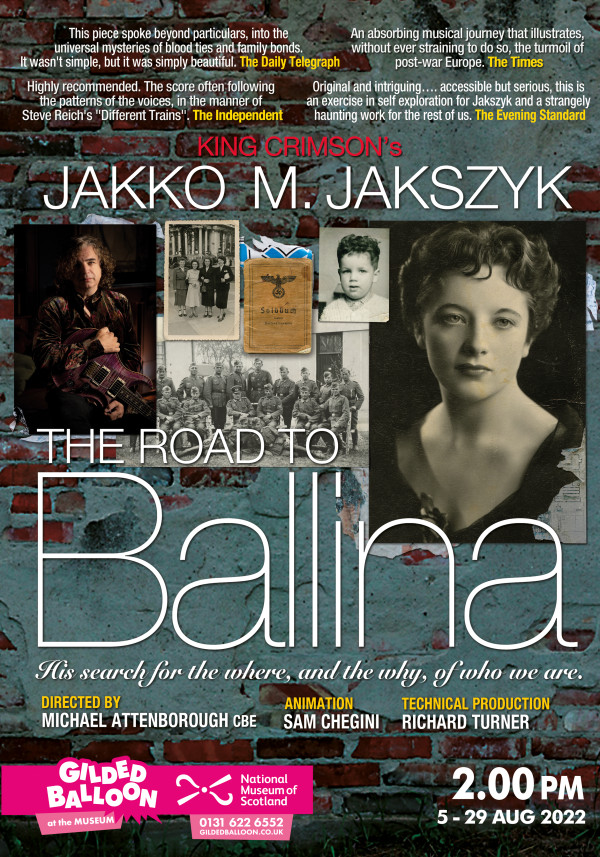 Tickets for all shows are available here
About 'Jakko Jakszyk - The Road to Ballina'
The Road to Ballina is the true story of celebrated rock musician Jakko Jakszyk’s extraordinary journey to discover his real family. Directed by the esteemed Michael Attenborough, this is moving, sometimes shocking, storytelling that merges music and animation to create unforgettable theatre.
The idea of turning The Road to Ballina into a theatrical piece came from Richard Turner, the technical producer. Then when Karen Koren, Artistic Director of the Gilded Balloon, suggested I get a theatre director to shape and mould the overall piece, I responded immediately with "I know just the man!"
After failing his trial for Watford Youth FC, Jakko’s trajectory into music and acting began, becoming a member of The National Youth Theatre and subsequently appearing in various sitcoms and theatre productions. In the 1980s, while acting in Wedding Song, Jakko met Michael Attenborough – the former principle associate director of the Royal Shakespeare Company and son of Sir Richard Attenborough.
A relationship spanning over 45 years has forged a mutual trust in each other’s opinion experience and skill, augmenting The Road to Ballina as a deeply meaningful theatre production.

Today DGM Ltd is delighted to announce the public launch of the highly anticipated documentary ‘In the Court of the Crimson King, King Crimson at 50,’ directed by Toby Amies (The Man Whose Mind Exploded).

Rising at 09.30 and into the day. Notes To Self  written yesterday at breakfast in Hotel Acceptable, Washington, where a flying-bastardy-thing bit me on the back of the neck three times. Music Is A Liminality Between The Impossible And The Possible... on RF's diary, updated today.

Rising at 09.30 and into the day. Notes To Self  written yesterday at breakfast in Hotel...

RF's diary from the road

Entering the day with intention and feeling less dismal. The bus will not be changed, so what...

Today DGM Ltd is delighted to announce the public launch of the highly anticipated documentary ‘In...

On the evening of September 22nd, at City Winery in Boston, an audience clapping on 5 and 7 and...

Toyah & Robert's weekend, at home and from the road!

Last day of covid isolation in Syracuse, en route to Boston where That Awful Man & His Very Nice...

En route from Syracuse to...

RF's diary has been updated from the Tourbus It-Is-Barely-Adequate, en route from Syracuse to,...