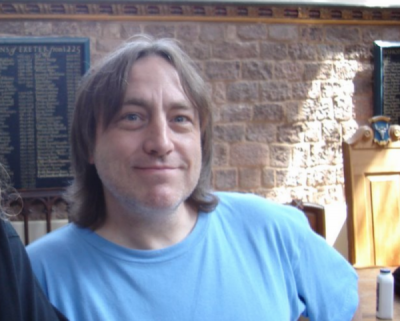 John Sinks, whose name will be known to many fans of King Crimson, the ProjeKcts and Robert Fripp’s solo work, has died. Last night on Facebook Robert made this announcement.

Sad news just in. John Sinks, Crafty, trusted and reliable engineer for KC and RF, flew from this world on 29th. December 2019.

John’s connection with King Crimson dates back to 1969 when he saw the original band on KC’s very first American tour. Perhaps inspired by this encounter John pursued a career in the industry that would eventually bring him into the orbit of KC/RF.

In an interview with John, he outlined his entry into that world.

“A friend of mine knew one of Frank Zappa’s roadies and invited me to go see a Zappa show with him and meet his friend. We went to the venue early to watch them set up. I offered to help and they put me to work helping to set up Terry Bozzio’s drum kit. After seeing what a days work putting on a rock show involved, I figured this is the life for me. But it took a while to find a way into the business.

Then I took one of Robert Fripp’s Guitar Craft courses. Whenever the League of Crafty Guitarists would perform or record I would help out however I could. This his how I began to learn all aspects of making a show or recording session happen.

I went to stay in the Red Lion House in Cranborne, England where Guitar Craft Students could stay and work with other students. In the room above mine, Trey Gunn was beginning to learn how to play the Chapman Stick. The members of what would become the California Guitar Trio also stayed there. Down the street, recording engineer Tony Arnold was building a recording studio in the old fire station. Tony had a rich history as an engineer and was the guy who built Fripp’s racks and took care of his gear. Whenever I could, I hung out at Tony’s, helped out in the studio and learned everything I could from him.

When Fripp formed “Sunday All over the World” he asked if I wanted to be the drum tech. One day on tour, Robert’s rack was humming very loudly. His guitar tech couldn’t find the problem. I suggested the problem was a cable that was lying near a power transformer. He said it couldn’t be that. They gave up on finding the problem and went to eat. I stayed on stage to watch the gear. When Robert returned to tune his guitar, he noticed the hum was gone. He asked if I knew why and I told him that I had moved the cable away from the power transformer.

Starting with the next tour I became Robert’s tech.”

Click here to read the full interview with John

Ronan Chris Murphy, who worked with John posted this observation on his Facebook page

I just learned that John Sinks passed away. John was a great guy and a real mentor to me when I joined the Robert Fripp / King Crimson team. He not only showed me the ropes, but he was a master of keeping his cool when things got stressful on the road. It dawned on me that when I was out touring with King Crimson ProjeKct 2, the crew was myself, Ken Latchney and John Sinks. Sadly I am now the only one left.

Biff Blumfumgagnge, who is part of the crew with the current King Crimson also paid tribute.

John was my original roadie buddy that introduced me to RF. We worked with Adrian Belew together for years and years previous. John spent his last years with his Mother in Palmyra after working with Dweezil, Steve Vai, Crimson and more -- my condolences to all of his family and friends. John was also the projectionist/friendly box office guy at the Majestic in the 70's and 80's when it was an arthouse movie theater. John had an innocent, beautiful view of life and problem solving and was a true pal. He kind of walked the earth like Zippy, with a dry humor-soaked view of things. Once we were planning dinner in - Cleveland, maybe? And he got so excited and says to Saul Zonana and I "dudes, you won't believe it. there's this amazing place with all these different kinds of foods - it's incredible! Forget the steakhouse, let's eat there!" So we did - and he was talking about a food court! I miss John, dammit.

Among John Sinks' many credits is that of a musician and writer. He co-composed Hope, a tune that was performed by the Robert Fripp String Quintet. Steve Ball, known for his work in the League Of Crafty Guitarists, wrote this about John and the piece:

Still processing the unexpected passing of dear friend and multi-decade, multi-dimensional collaborator John Sinks. John quietly delivered Hope into lives all over the world via his selfless work. John possessed knowledge and know-how that he gracefully shared with everyone he met.

This piece is often attributed to other (important) collaborators and arrangers, but the essence of this piece came from and is 100% John.