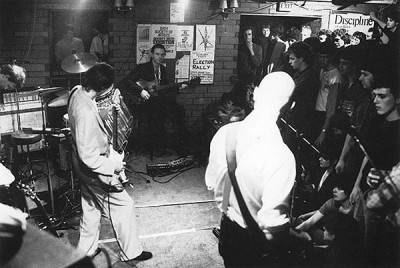 Moles Club is a hole in the wall kind of place. Located at the top of the main street in Bath, it's so hidden you have to comb the 2 block long stone wall to find the steps in it leading down to the club's entrance. (I've stayed in the hotel above Moles, which indeed used to be called The Hole in the Wall Hotel).

Moles is a pretty odd place, and in it's way, a great gig. I've played there with both Peter Gabriel and with Crimson - in each case as a warmup gig for a tour (I guess we were sure to have no press present there - they wouldn't fit). Trouble is, the audience didn't fit in too well either - only those in the front row could see the band - and the restrooms are located behind the band, so during the set people constantly would squeeze between me and Bill, to get to the loo.

But, hey, no place is perfect. The attitude from the crowd there is always great, and on the Crimson show I got some good photos from my camera mounted high above us and to the side. Shots not only of the band, but of the folks scurrying through the band. Later examination of the shots (one of which was in my Road Photos book) revealed some members of the future Tears for Fears in the front row.