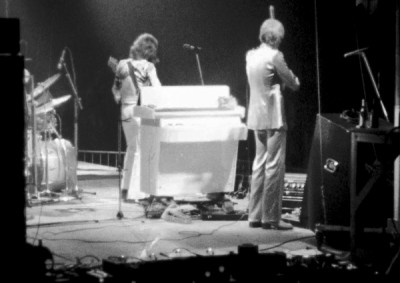 If you listen carefully to the first improv, The Golden Walnut, you’ll hear guitar lines that would later form the basis of One More Red Nightmare making a tentative, fast-moving appearance. After the gig opinion in the group was divided about what had taken place with both Wetton and Cross experiencing difficulties during the show (Cross hadn’t been able to hear what was going on in places). All agreed the audience hadn’t been the easiest to win over. Fripp’s diary entry for on June 24th concludes “General verdict: hard work, not the kind of gig one would want every day of the week, but a success.”

This is also available as KCCC 45. 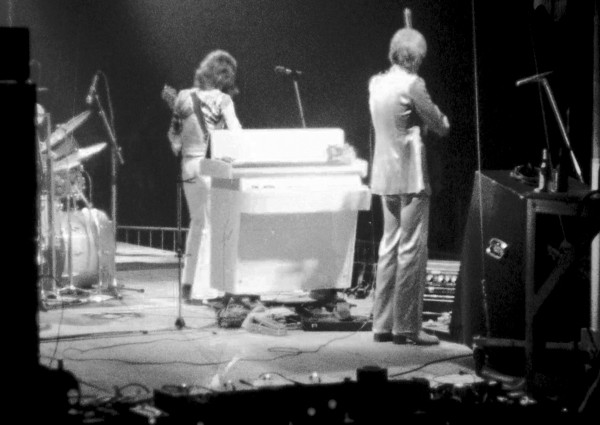 If you listen carefully to the first improv, The Golden Walnut, you’ll hear guitar lines that would later form the basis of One More Red Nightmare making a tentative, fast-moving appearance. After the gig opinion in the group was divided about what had taken place with both Wetton and Cross experiencing difficulties during the show (Cross hadn’t be...

Written by Jure Humar
Absolutely essential
What the audience thought when they heard The Golden Walnut back in 1974,one can only imagine. I, for one, upon hearing it just a few years back, experienced sheer joy and awesomeness. This show is a total beast and one of the most important performances of the 1974 tour. Larks II is monstrously delivered, followed by the never tiresome Lament and the melancholic Exiles. Then the band ventures into the before-mentiones improv, in which all members absolutely lose themselves. Robert's guitar appears to be on fire, John's bass transforms into a volcano, Bill's drums make me wanna run and scream and David's violin adds a godly flavour to the whole thing. The Night Watch is always welcome with it's poetic violin and Fracture is a beast (as always). Then we come to another very interesting and very different improv from the first one. An eclectic piece as only King Crimson can make it, it's very experimental and odd. But maybe even more rewarding than The Golden Walnut. Finally, the band closes with an outstanding Easy Money, and equaly fantastic Starless and Schizoid Man. June 24th1974 must have been a hell of a day for Toronto, as King Crimson played a show that shows the true power of music. If undecided, get this show just for the improvs. They are worth the price alone. I have absolutely no doubt.

Written by William Jenks
Two great improvs and some very easy money
Though I am not as huge a fan of the straight improvs as many hard core KC fans, the two this night are terrific. The second half of Clueless in particular is terrific. (And in case you wondered, RF was no fan of rude audience members as far back as 1974, evidently.) The version of Easy Money at this show is particularly fun for me. The sound and instrumental separation is particularly clear for the era. While it's a relatively straightforward rendition with modest soloing that wouldn't be on the studio version, it just sounds so lovingly played: gentle in the right spots, playful elsewhere, and of course with a good pounding shred when called for.

Now on their third North American date, and these boys are absolutely on fire right from the first snare roll. After the...

Whenever the opening chord of this song emerges, although your unlikely to hear it on any live recording, it’s often...